A little about the ben schueller auction company... 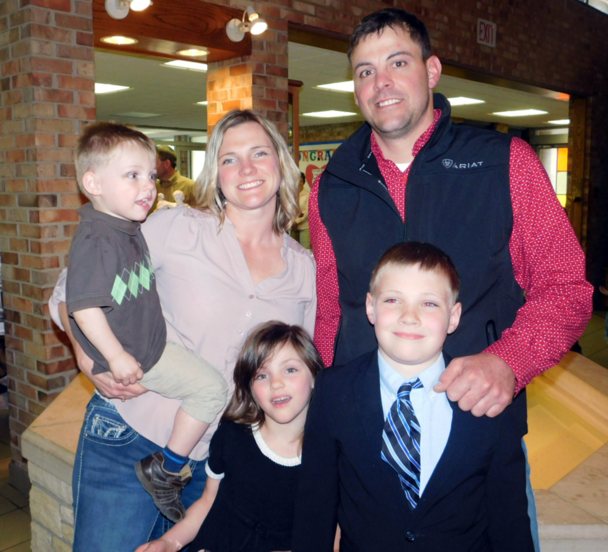 ​​The Ben Schueller Auction Company was born in 1999. Ben Schueller born and raised in Maquoketa, Iowa had always loved working with people and had a gift of talking fast. Just out of high school, his parents told him he had to go to college. Ben knew that standard college education was not for him so he struck a deal with his parents that he would attend the World Wide College of Auctioneering. The experience and knowledge gained during his time there only fueled the Ben’s ambitions as to one day becoming a full time auctioneer… but of course it takes time and determination to build any business.

While working for many years as a full time Contractor, Ben pursued his auction business as a part-time, weekend career. In 2007, Ben married Abby and soon after they welcomed their son Lucas in 2008 and a daughter Audrey in 2010. With the coming of the second child, Abby left her full time job and Ben decided it was time to ramp up the auction business.

In 2014, Ben and Abby put together the liquidation auction of Banowetz Antique Mall.  Banowetz Antiques Auction consisted of a 3-day internet and live auction and on the final day of the auction, the 13,000 sq. ft. building that housed Banowetz Antiques was to be sold by auction. With a lot of thought and optimism, Ben and Abby purchased the Banowetz building. This became the now home of the Ben Schueller Auction Company and the start of what has now become a successful full time business for Ben & Abby. Ben has since retired from construction and can most days be found picking up estates, looking at future auction business, or setting up for an upcoming auction. Abby can also be found many days working at the Auction house or corralling the now three children while they inspect, photograph, and catalog the upcoming auction pieces.

Our Owners:
Ben and Abby Schueller: Ben and Abby now have 3 beautiful children. Lucas is ten years old and his joy after school is to sit down and play auction barn with his dad. He is a regular helper at the auction hall and you can find him as an acting ring man or behind the food stand counter.   Ben will certainly have a predecessor. Probably sooner than he thinks. Audrey is seven and likes to just hang out at Schueller Auciton Building. There is usually a fridge full of pop that she can con mom out of while she walks around and looks at all the cool auction pieces. Then there is young Jack. Soon to be 5 years old and he makes his own fun at Schueller Auction Company. Usually it is something that Abby will have to clean up later. It is very cute to watch him climb up on the auction block and pretend he is talking jabber in the microphone. They are all truly a blessing along with all the other friends and family that have helped make Schueller Auctions what it is today and what it will be tomorrow.

The Ben Schueller Auction Company is truly, here to serve the needs of the buyers and sellers that walk through our doors. We have a goal everyday beyond just making the all mighty dollar. We want our patrons to remember us for being efficient, competent, and making them feel comfortable to be with us. Whether it be for the liquidation of an estate or simply a single day sale, The Ben Schueller Auction Company wants to make you happy so that we may have the opportunity to serve you again.